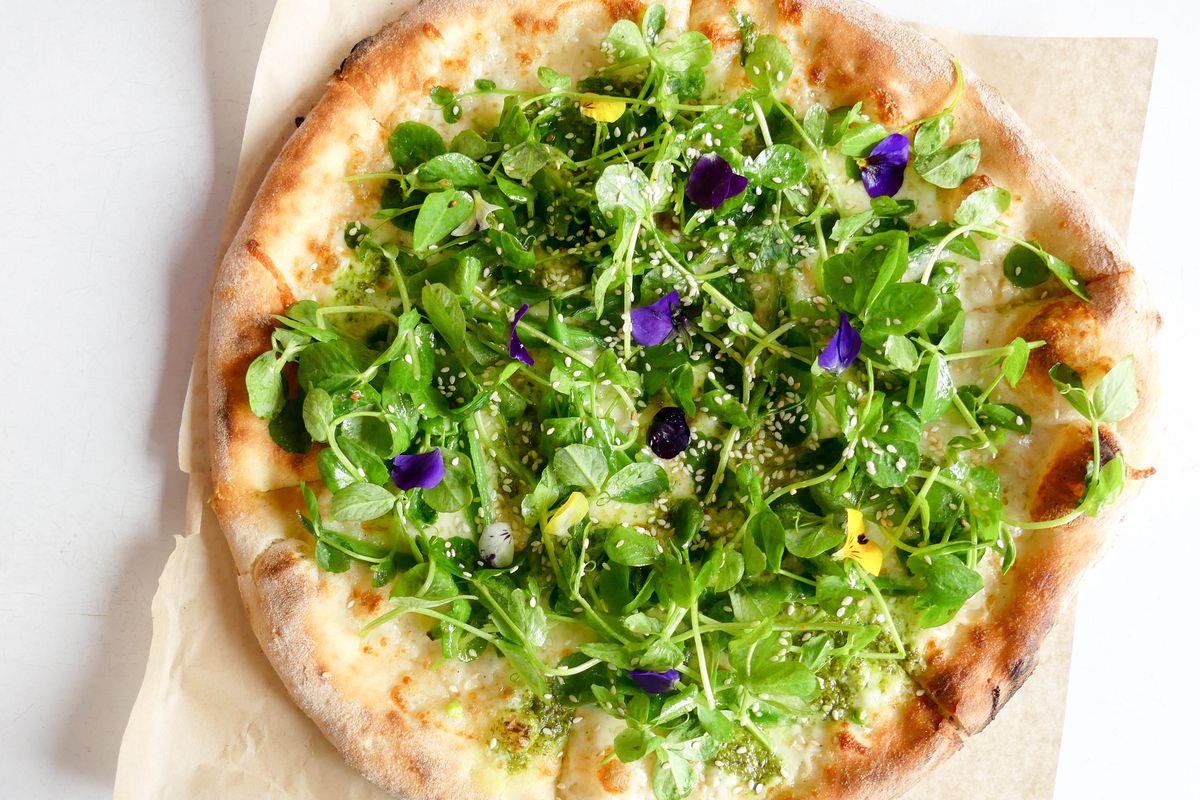 Edible flowers and microgreens are appearing in more dishes and drinks throughout the area these days, cropping up everywhere from Michelin-starred restaurants such as Barmini to food incubators like Union Kitchen.

One of the rising players is Little Wild Things; now in its fourth growing season, the Union Market operation is producing 30 varieties of edible flowers each year — and hopes to add more after relocating to a much bigger space later this year.

“Edible flowers have come into their own in the last year or two, with more people understanding their health and flavor benefits. They are so fun to play with, and can be savory or sweet or decorative,” says Little Wild Things director of operations Chelsea Barker.

To feed rising demand this past year Little Wild Things weeded out lettuce and radish production completely in order to focus on more colorful ingredients. Little Wild Things plans to leave its temporary growing space next to Union Market and expand to a permanent location in Ivy City this summer. That 3,000-square-foot warehouse location off Kendall Street, currently being built out for Barker’s business, will be three times bigger than her current operation.

The list of local restaurants hopping on the edible flower train is seemingly endless; Bresca, Service Bar,Beefsteak, and the Bird are among those already in on the action.

“Chelsea’s micro-arugula inspired our pesto for the Julia pizza,” says Timber Pizza Company co-founder Andrew Dana. “Working with these local farmers you are getting the freshest, and more importantly tastiest ingredients.”

Along with using Little Wild Things’ flowers and micro cilantro, Timber sources from a trusted group of producers. Its rooftop garden, located across the street, is managed by Love and Carrots. Goods from Tuscarora Organic Growers Co-Op in Pennsylvania and Owl’s Nest Farm in Maryland are also piled onto pizzas and salads.

A seasonal cocktail at Ocean Prime features a hint of color provided by another regional producer. Ocean Prime general manager Alex Schultz says the bloom floating in the Sakura Dawn is from the Chef’s Garden in Huron, Ohio; the flowers are picked there and shipped overnight to the D.C. restaurant.

“It still has a clean look that does not overpower or take away from the cocktail itself,” says Schultz. Other floaters have included pink Egyptian Star flowers and Johnny Jump-ups (known for their vanilla flavor) and other members of the viola family.

Penn Quarter’s 701 Restaurant uses lots of microgreens and flowers in entrees and cocktails, mostly from Blue Moon Acres in Pennsylvania. Executive chef Lincoln Fuge tells Eater he especially likes micro herbs because of their “clean flavor,” as they “tend to be more pronounced and pure than the fully grown herbs.”

Dirty Habit head bartender Sarah Ruiz integrates microgreens into the serrano ice that chills her Prickly Position cocktail. Their “slightly earthy and spicy notes” pair well with its smoky mezcal, she says. Most of the featured ingredients hail from local farms in Maryland and nearby Pennsylvania, Ruiz says, while other herbs and greens used for flavor or aesthetic purposes come straight from executive chef Kyoo Eom’s home garden.

And she’s not the only drink maker having fun with flora. On Monday, May 14, Royal is hosting an “April Showers Bring May Flower {Cocktails}” event featuring edible flower-infused syrups, floral spirits and liqueurs, and blossom garnishes.

Once Little Wild Things moves this summer, the public should be able to catch a glimpse of the growing process in action. When Barker lived in California she worked in school garden education, and she plans to incorporate science lessons, tours, and tastings at the new space. She predicts that an added walk-in cooler and germination chamber will save the company 90 minutes of labor every day.

“We can really scale our business because we want to expand past the DMV area,” Barker says.

How to Turn $5000 into A Profitable Urban Farm

You might not expect to see farming in the heart of the nation’s capital, but a resilient young grower is putting the USDA micro-loan...
Read More
Posted: 5/08/2019November 21, 2020

Why an entrepreneur believes urban farming is the future in D.C.

WASHINGTON (WJLA) — Down an unmarked trail at a monastery in Northeast Washington, you might not expect a farm delivering to some of the District’s...
Read More